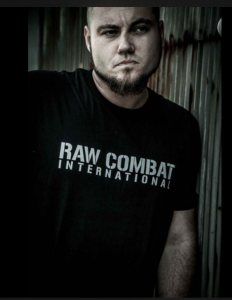 Luke Holloway, the Founder of Raw Combat International is an Aussie who spent many years traveling  throughout Asia researching and developing his skills in South East Asian Combative Arts.
He eventually moved to Japan and was posting Vlogs about life in Japan as a 'Gaijin' Bodyguard.
It wasn't long until those surrounding Luke began to ask for some training and eventually 'Raw Combat Japan' was born.. Luke's videos were becoming a hit on YouTube, having viewers come from all over the EU, UK, North America & Australia to train with Luke. He eventually began to tour in 2009 as he was asked to teach seminars across the UK, Europe, the U.S., Brazil and today we have training groups and students in over 40 countries.
Today Luke's videos have had over 50million views,
Luke has a personal You Tube account where he shares his experiences traveling and learning foreign customs and cultures,  you can check out his channel here:

In September 2012, 'KEEP it RAW!'   was commissioned and began broadcasting in the U.K. & E.U. on the Sky Network, a Total of 5 Series were written, produced & directed by Luke Holloway himself.

Luke is currently still traveling, training and researching the arts.

A list of Luke Holloway's industry relevant credentials & qualifications can be found at his personal site:
http://www.luke-holloway.com/